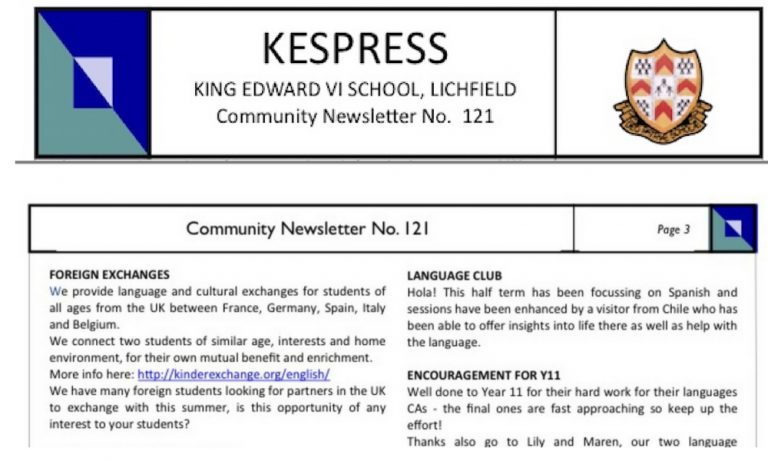 One evening two years ago we were struggling through supper with our French lodger, Guillaume. He was a solemn, monosyllabic young man. My husband, Jeremy, had asked about local dishes in Lyons and I’d resorted to « Do you live in a suburb or in the middle of the town? » But every conversational ball lobbed towards him landed like a paper weight in soft grass.

So I was getting a bit desperate. And I did what every parent does in desperation resorted to my children. I turned to our 12-year-old son and said brightly:
« Teddy learns French at school, don’t you Ted? » Ted didn’t look up. »Go on, Ted, » I said. « Show Guillaume. Say something in French. »
« Wot? » said Ted. »Go on. Anything. »Ted looked uncomfortable. He shrugged.
Then in a robotic voice he said, « Je habite à Teddy. »And, for once, Guillaume smiled.

So, my suspicions were confirmed. Ted had been learning French at school for two years but he still couldn’t say anything remotely sensible in the language. He still didn’t speak French, and probably didn’t think anyone else did either. French was not a language, but a school subject.
In tiger mother mode, I set to work. A couple of weeks later, I told Ted that I had arranged a summer French exchange for him. I had spoken with Madame on the phone; Adrien was a sporty boy like Ted and his family lived outside Paris. Ted would go to France to stay with Adrien in the summer, and later Adrien would come to us. I didn’t ask Ted. I presented his French exchange as one of those things he just had to do – like going to school, or putting out the recycling.

Ted, of course, protested. Nobody else in his class had had a French exchange, so why should he? I pointed out that, aside from football and Xbox, he had zero extra-curricular activities, played no musical instruments, had no improving hobbies. Trying to not sound too grim, I added: « It’ll be fun! » But Ted had sat through « Do you live in a suburb? » suppers and he looked sceptical.
Ted flew off to Corsica on an extraordinarily expensive unaccompanied minor ticket and for the next 10 days Madame sent me mobile phone pictures every day. Ted in sunglasses on the beach, Ted diving into a mountain pool, Ted with a gaggle of French boys, Ted at the market, Ted delving into a vast ice-cream sundae, Ted eating pizza, Ted up on a tree-top assault course, Ted and Adrien holding a plate of sea urchins they had caught. He was having a grand time.

Ted came back brown and very happy. He’d developed a Gallic shoulder shrug and a taste for Lipton’s iced tea. He’d also acquired an unhealthy obsession with fireworks and hunted through Bristol high and low for bangers. He had learned a language too. He spoke fluent French-accented English. « Pleeze pass ze buttergh. » We now had our very own little in-house Inspector Clouseau.
Adrien came to us a few weeks later. We were then in Edinburgh visiting my father and the Gaelic cousins. I felt the swap wasn’t entirely fair. Where Ted had had sunshine and sandy beaches and French food, Adrien got Scotland, which is really an adult pleasure. Children don’t drink fine malts and they don’t « get » views.

Instead of having one Just William in the house, I now had two.
At the end of August, Adrien went home and life returned to normal. Well almost normal. For our family had altered somewhat.
The first change was most pleasing. Ted, though he wouldn’t speak French in our presence, did seem to have learned something. After a few days back at school, his French teacher stopped me in the corridor. The improvement, she said, was amazing. Until then he had been an indifferent student, now Ted was getting As, even in his written work.

Madame and I arranged more visits. The following Easter, Ted stayed at Adrien’s house and went to Disneyland Paris. And Adrien endured a damp outward bound holiday in the Welsh hills. A few months later, Ted went to Brittany and Adrien came to us.